UFI Filters is this year celebrating the 50th anniversary of the business. The Universal Filter Italiana S.p.A. was founded in 1971 in Verona, Italy, where it is still the group’s headquarters and has the aim of supplying filtration systems to the automotive market.

In order to expand distribution possibilities in the aftermarket, the company founded Sofima in 1981. The group then began collaboration with leading Formula 1 teams.

UFI says in 1983 it was the first company in the sector to establish contact with China, where nowadays it is recognised as a supplier of excellence for the Original Equipment Market (OEM) in the automotive sector.

Nine years later in 1992, Sofima Hydraulics, the production of filtration solutions for the hydraulic sector began in Bergamo, Italy. In 1999 it became Planet Filters. 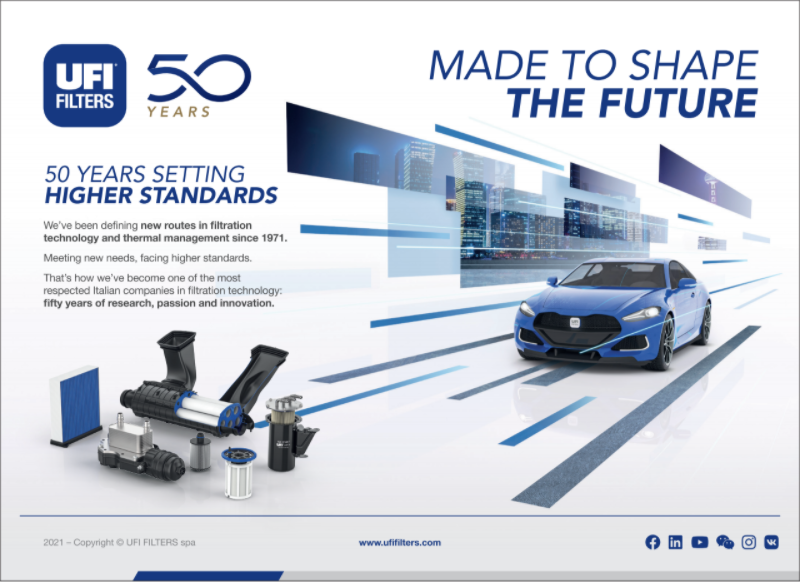 In 1996 the group was the first European filtration company to enter the Chinese market, inaugurating the Sofima Automotive Filter Shanghai Co.. The end of the 90s was a period of strong growth, according to UFI, as the company says it dominated the automobile manufacturing market for fuel filters which ensured the separation of water from diesel.

UFI Filters says in 2001 it consolidated its reputation as a global OEM supplier to the world’s largest automobile manufacturing companies. UFI arrived in the United States, where UFI Filters inc. was founded in Atlanta. During this period, investment was concentrated on the expansion of the Research and Development department located in the group’s headquarters in Italy.

The UFI Innovation Centre was founded in 2006, a research and development centre dedicated to the study, design, testing and development of new filtering materials, which boasts the collaboration with the physics department of the University of Trento – one of the most prestigious in Italy.

Fast forward to 2015, where the new all-in-one Sofima Filters plant was built in Tunisia for the production and assembly of air and diesel filters for the main automotive manufactures and the European independent spare parts market. The same year also saw UFI open the new front office of Dubai, a strategic-commercial outpost for the aftermarkets in the Middle East and Africa.

Now in 2021, the company is recognised as a point of reference in the filtration sector and in the production of heat exchangers for combustion, electric and hybrid vehicles, with business premises on five continents.

UFI Filters says it is committed to setting ever-higher standards, to creating and ensuring maximum efficiency in the world of filtration and to providing new tailor-made solutions thanks to the solid know-how that it has built up since 1971.