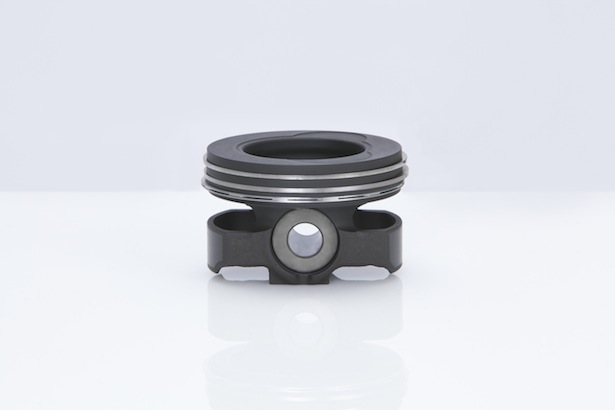 In diesel engines, steel pistons offer considerable potential for reducing CO2 emissions, compared with the aluminum pistons which had been used previously. The advantages of steel pistons lie in reducing frictional loss and improving thermodynamics, adding up to fuel savings of around three percent in the NEDC.
Mahle steel piston technology is used by Renault in its new Euro 6 four-cylinder diesel engines: a 1.5 L engine (K9K) with 81 kilowatt power output and maximum torque of 260 Newton meters, and a 1.6 L engine (R9M) with 96 kW and 320 Newton meter. Mahle supplies MONOTHERM® pistons with piston rings and pins for both of these engines.
The Mahle MONOTHERM® piston has already proved itself many times over through its use in commercial vehicle engines. Moreover, Mahle has gained its expertise with steel pistons from the extreme conditions of long-distance racing under which diesel engines have to compete at the 24 Hours of Le Mans. For the series production of passenger car steel pistons, Mahle will be investing in four new fully-automated production lines over the course of the next few years. The first production line is already in operation at the plant in Rottweil.