Land Rover has treated members of Old Belvedere RFC to a visit from the greatest prize in world Rugby.

The Webb Ellis Cup, which will be lifted at Twickenham Stadium on t October 31 by the winners of Rugby World Cup 2015, arrived in a bespoke Defender, created by Land Rover’s Special Vehicle Operations department to transport the Webb Ellis Cup throughout the 100-day Tour of the UK and Ireland. The Trophy was accompanied by Leinster Rugby stars Gordon D’Arcy and Isa Nacewa.

As part of the day’s activity, D’Arcy and Nacewa conducted a training session for the youngsters of the club’s youth section as they looked to develop their skills in a grassroots Rugby festival. The rising stars were able to see the coveted Webb Ellis Cup first hand as it completed its visit to Ireland.

D’Arcy, who has been capped 81 times for Ireland, said: “It is a great opportunity for aspiring young rugby players to get to see the famous Webb Ellis Cup as it travels around UK and Ireland. It was hugely encouraging to see the children enjoying their Rugby so much here today and some of the skills on display were very impressive. We may have witnessed future stars of Irish Rugby in the making!” 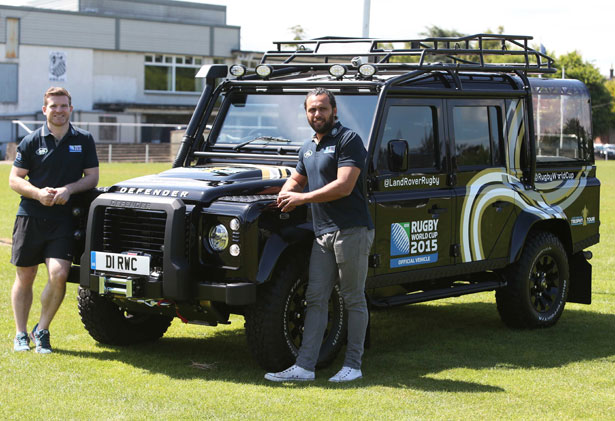 Melanie McCourt, Marketing Manager of Jaguar Land Rover Ireland, commented: “Land Rover is helping to inspire the next generation of Rugby talent by allowing as many people as possible to engage with the Tournament and see Rugby’s biggest prize. It is in keeping with our Rugby World Cup 2015 campaign #WeDealInReal, which aims to champion the grassroots of the sport, bringing people closer to the pinnacle of world Rugby.”

As the Trophy leaves Ireland, Land Rover will continue to support the Tour as the Rugby World Cup 2015 Defender transports the Webb Ellis Cup around Wales and England before delivering the Trophy to Twickenham Stadium for the Opening Ceremony on September 18. The Trophy will also visit all Rugby World Cup 2015 Venues and Official Fanzones during the Tournament.