Energetic female staff from KYB have raised cash for a life-saving charity.

It is the fifth year that staff from the company have competed in the event, which was held this year at Leigh in Greater Manchester. 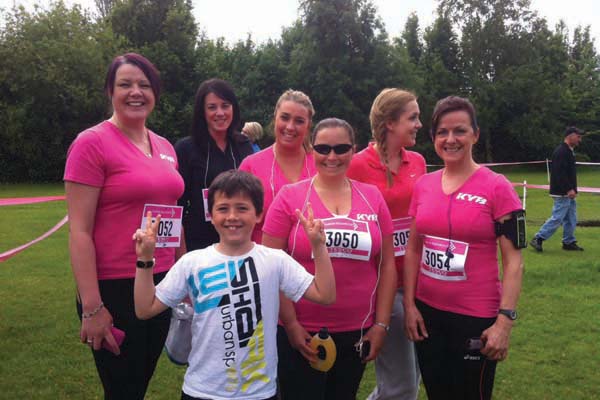 Sue Clough, Customer Service Manager, KYB UK, who was one of the team members, said: “The day went very well. We’re not all the fittest people in the world, so this 5k run really was a genuine challenge for us and some of us ran and some of us walked.

“I would like to thank everyone who supported us to raise funds for what is a fantastic charity that helps so many people.”

An intrepid team including Race for Life participant Vicky Smith is planning to climb the highest mountains of England, Scotland and Wales on July 20-21 to raise cash for the motor industry charity BEN. The event will see them walk 24 miles, climb 10,000 feet and drive 450 miles in just 24 hours.

Anyone who wants to support the team’s efforts in scaling Ben Nevis in Scotland, Scafell Pike in England and Snowdon in Wales can do so by visiting  www.justgiving.com/KYB3Peaks

The team’s progress during training can also be followed on the blog; http://kyb3peaks.blogspot.com/