Autodata, part of Solera Holdings, Inc. has published its ‘Most Serviced Vehicles 2019’ report. 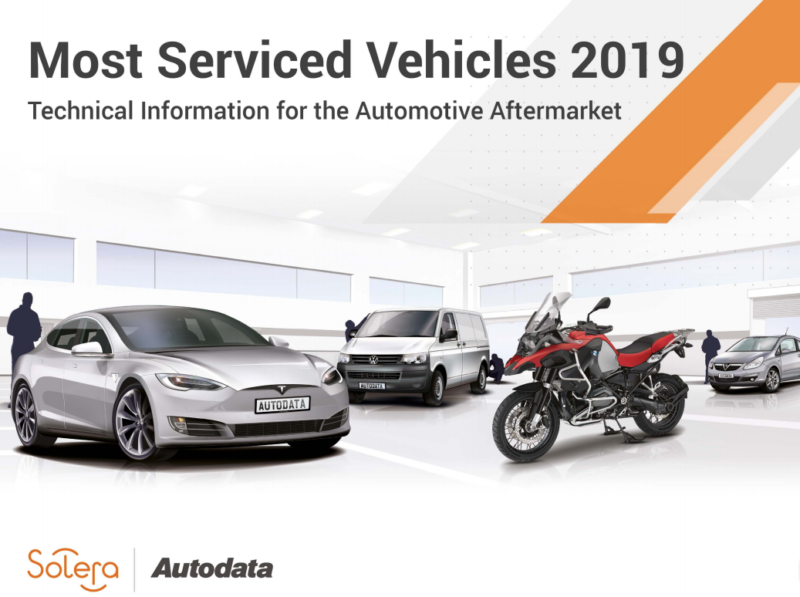 As well as highlighting the most serviced vehicles, the report indicates some key trends in the automotive aftermarket sector. When all markets are combined, Ford was the overall most serviced manufacturer. However, a notable observation is the continued prominence of Volkswagen which is in first place as the most serviced brand in 55 per cent of the countries surveyed including Ireland.

The report also reinforces the dominance of national brands being the most serviced cars within their respective countries. In Germany, all top 10 places were attributed to German cars and it was the same for French cars in France. In Italy, Italian cars made up 50 per cent of the top 10 and in Sweden, Swedish cars accounted for 70 per cent of the top 10 with Volvo models filling the top three positions.

In Ireland, Japanese manufacturers continue to dominate the top 10 most serviced hybrid vehicles, filling eight out of the 10 positions with the Mitsubishi Outlander (12-) in first position. The Tesla Model S (13-) was in first place as the most serviced electric vehicle after having not appeared in the top 10 in the either of the last two reports. It was also in second place internationally demonstrating the continued rise in popularity of the Tesla marque across all markets.

Internationally, the Most Serviced Car Report 2019 was topped by the Opel/Vauxhall Corsa-D with the Ford Focus (model year 2004 & model year 2008) remaining in second and the Nissan Qashqai/Qashqai +2 (J10) was third. The most serviced LCV was the VW Transporter T5 (04-15) which retains first place for the third report in a row, while the most serviced motorcycle was the Honda CBR.

Rod Williams, MD of Autodata, commented: “Autodata’s continuous evolution of the product enables us to provide customers with increasingly valuable technical resources. Data from our extensive global database allows us to see where the demand for content exists so that we can provide the most in-demand and up-to-date information to workshops.”

The full copy of the report can be accessed here.