Skip to content
HomeNewsEuropean demand for electrified vehicles continues in June
Uncertainty continued to spread across the European new car market in June. According to JATO Dynamics data, 1.13 million units were registered last month, indicating a drop of 24 per cent compared to the 1.49 million new cars registered in June 2019. Although a large decrease from last year, June saw a positive increase month on month, with the strongest result since February 2020, when the COVID-19 pandemic hit the continent. 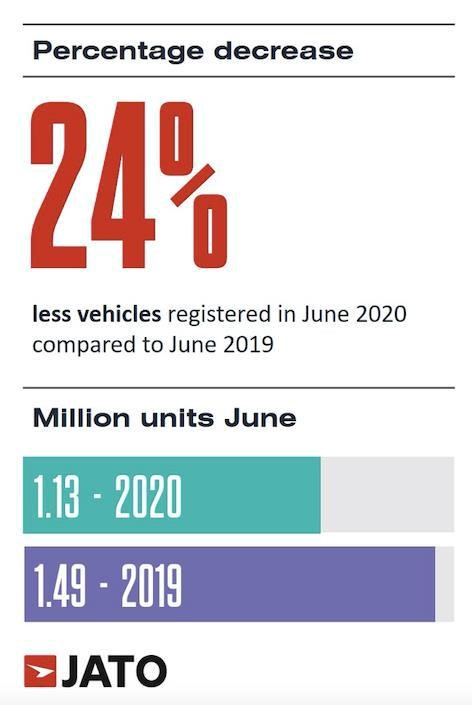 Felipe Munoz, global analyst at JATO Dynamics, commented: “At the moment, we can’t yet talk about recovery as the pandemic is still present in Europe. However, consumers are slowly responding to the new deals, offers and incentives set in place to revive sales”. Similarly, the results for H1 2020 also reflected the chaos caused by the pandemic, as volume totalled 5.09 million units, down by 39% from H1 2019.
EV demand continues to growThe global pandemic has accelerated the adoption of electric, hybrid and plug-in cars in Europe, with diesel and petrol vehicles losing traction as a result. June was no exception to this trend. While petrol and diesel registrations fell by 32% and 31% respectively, compared to June 2019, the volume of new EVs registered rose from 111,300 units in June 2019 to 183,300 units last month, up by 65%. In other words, the market share of EVs was 16.2%, which closes the gap to less than eight percentage points compared to the market share for diesel cars. For every EV registered, in June 2019, there were 1.7 diesel cars registered – a ratio of 4.1 to 1. 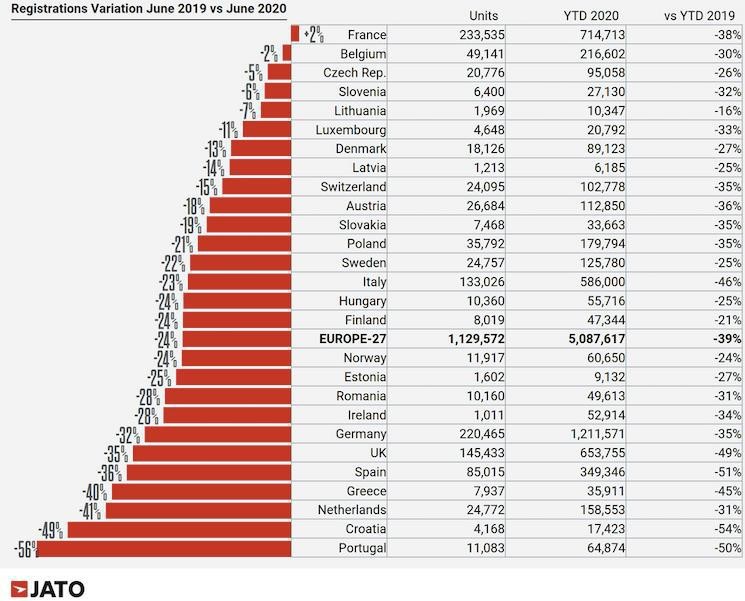 Munoz explained: “Despite the decline in consumer confidence and employment, the new landscape seems to be offering a prime opportunity for electrified cars – one not seen since their introduction. The combination of greater offers, better deals, higher incentives, and more consciousness among consumers for a green future, is boosting EV demand more than ever.” In June, the three main EV technologies posted strong growth, with hybrids accounting for half of the segment registrations.Among the most successful hybrids were Suzuki, Ford and Fiat, which, thanks to the mild-hybrid technology, were able to outsell other large players such as Kia and Lexus. The plug-in hybrids market was dominated by three premium brands (Volvo, Mercedes and BMW), leaving the previous leader (Mitsubishi) in sixth place. In the pure electric segment, Renault took first place as its volume more than doubled, in contrast to Tesla in second place given a 42% decline in volume.
More than 450,000 SUVsDespite the difficult economic landscape, SUVs performed relatively well. Although their registrations volume fell by 18%, they were able to increase their market share to 40%. Interestingly, the largest, most expensive SUVs posted the best performance, with registrations down by only 2% to 24,100 units. Compact SUVs saw a 21% decrease and were outsold by small SUVs whose volume totalled 184,800 units.

Volkswagen Group was the top seller in this segment with a market share of 25%. However, Ford, Volvo and Mercedes broke the trend by recording increases of 1%, 39% and 24% respectively.
Renault Clio rises above Volkswagen Golf 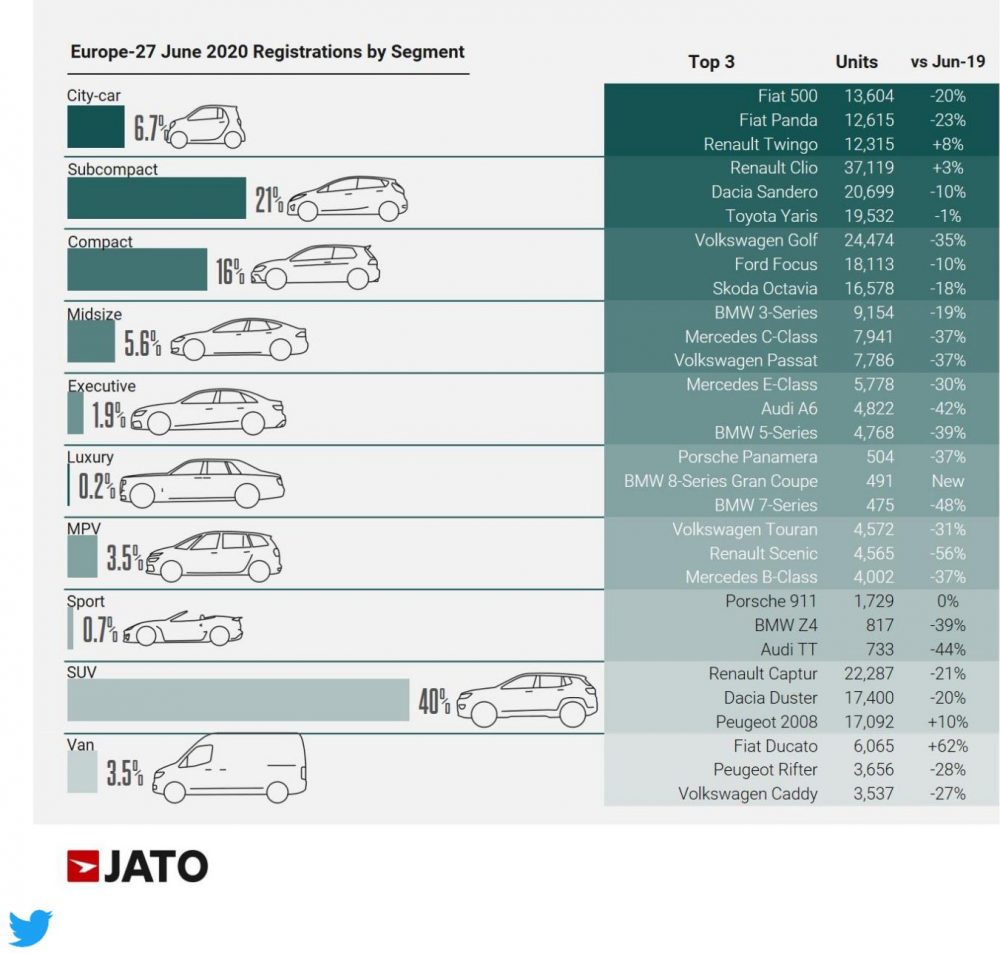 Volkswagen Golf was knocked down to the second spot for the second time in a row by the Renault Clio. Product availability of the new generation continues to be the main issue. The Renault Clio fifth generation is available across all European markets – with its volume accounting for 79 per cent of the model’s total registrations – while the Volkswagen Golf eighth generation is yet to arrive in every market, resulting in a smaller 28 per cent share of the compact’s total volume.The Clio was not the only model from Groupe Renault that performed well in June. The French group placed the Renault Captur and Dacia Sandero in the third and fourth positions respectively. The Captur, boosted by the new generation, was also the top-selling SUV in Europe during June. Further down the rankings, the Toyota Yaris also performed well, especially considering the new generation only accounted for 6 per cent of its volume.Other successes in the month included the Peugeot 2008 (up 10%), Renault Twingo (up 8%), Volvo XC40 (up 56%; second top-selling premium car), Volkswagen T-Cross (up 1%), Ford Puma with 10,300 units and Hyundai Kona (up 14%), Skoda Kamiq with 7,900 units and Volvo XC60 (up 28%), Mercedes CLA (up 31%), Kia Niro (up 27%), Fiat Ducato (up 62%), and Volvo S60/V60 (up 6%).