Dublin based Jack Kennedy returns from the world stage to join Team WD-40 Kawasaki for their two pronged attack on the 2015 MCE Insurance Superbike Championship.

Kennedy has previously been a contender in the Motorpoint British Supersport Championship, narrowly missing out on the title in 2012 after being forced to retire in the final race of the season. The Dublin-based rider has since spent two seasons in the World Supersport Championship and is now ready to take on the challenge of MCE BSB. 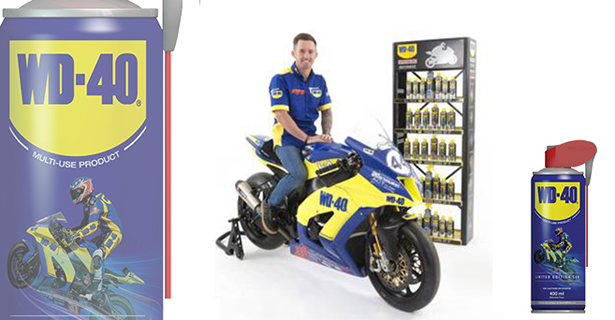 To mark Team WD-40’s forthcoming campaign the brand has launched a limited edition can of its famous multi-purpose lubricant! Currently available from Team P R Reilly each can comes with a fantastic free window sticker showing a SuperBike in action.

Unfazed about the challenge ahead Kennedy said: “I have been looking at the transition into Superbike for a few years and it was the chance to join Team WD-40 that has excited me the most because I know we can have a real crack at it. I know there is such a huge following of BSB and I am looking forward to getting back out in front of those big British crowds again. The level of competition in BSB is unreal; if you look at the list of riders already announced it shows the depth of field and I am excited to be a part of that.

“I couldn’t be more confident than I am now for joining this team with their package and crew. Every rider in BSB focuses on being in the Showdown and that is the same for me. I want to be pushing for the top six and then we can go hell-for-leather in the last three rounds. Both myself and the team want to be fighting for podiums – we are certainly not there to make up the numbers!”

One thing is for sure – the Wd-40 SuperBikes will definitely be in tip top shape as the team will have an unlimited supply of the WD-40 Specialist Motorbike Range at their disposal!