AS-PL has launched a new alternator (A3418S) for use in a range of popluar brand models.
Read More

Overrunning alternator pulleys are becoming increasingly popular on many modern passenger cars and light commercial vehicles due to increased alternator loads. As opposed to traditional solid pulleys, they allow the alternator to free-wheel or overrun every time the engine decelerates and, at the same time, dampen vibrations at the alternator.
Read More 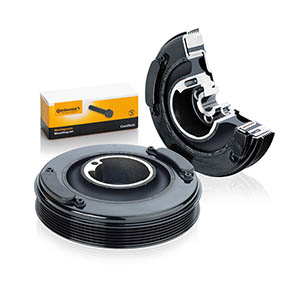 One of Continental’s key priorities this year is to expand its torsional vibration damper portfolio. New TVD pulleys, updates of existing ones and continuous improvements in product quality are planned. An expanded TVD program with five new sizes will be available as early as this spring, with further types following in the months ahead. “Our
Read More

Autoelectro, the UK-based remanufacturer tells us its latest group of part numbers have now been added, following what it describes as extensive research and analysis of the UK and Irish car parcs. In doing so, Autoelectro says that it continues to prove its commitment to offering excellent availability to its network of motor factors across
Read More

Peugeot, Citroën, Ford, Mercedes-Benz and Renault star in Autoelectro’s latest new-to-range starter motor and alternator references. The UK’s largest independent remanufacturer and supplier of rotating electrics has released its latest batch of part numbers, following extensive research and analysis of the UK car parc. In doing so, Autoelectro continues to demonstrate its commitment to offering comprehensive availability to its customer network
Read More

From a Porsche 968 and Maserati Quattroporte to a Perodua Myvi and Daihatsu Extol, Autoelectro has received an eclectic mix of customer enquiries for obscure starter motor and alternator references over the course of its 30-year remanufacturing history. While the ‘rebuild and return’ process and adding of a part number not already on Autoelectro’s stock
Read More

Autoelectro, the UK’s largest independent remanufacturer of starter motors and alternators, continues to provide technicians with the latest up-to-date technical information. This information ensures accurate diagnosis and correct fitting, with the latest two bulletins focusing on Toyota and Mini models. Focusing on the Toyota first, a problem has been discovered with the ignition switch and
Read More

Its’s been another phenomenal year for the INA brand which has been expanded to cater for the requirements of millions more vehicles on the UK and Ireland’s roads. New-to-range belt drive components were launched by Schaeffler (UK) Ltd in 2016 for an incredible additional 27.68 million cars and Light Commercial Vehicles (LCVs). This comprised 103
Read More